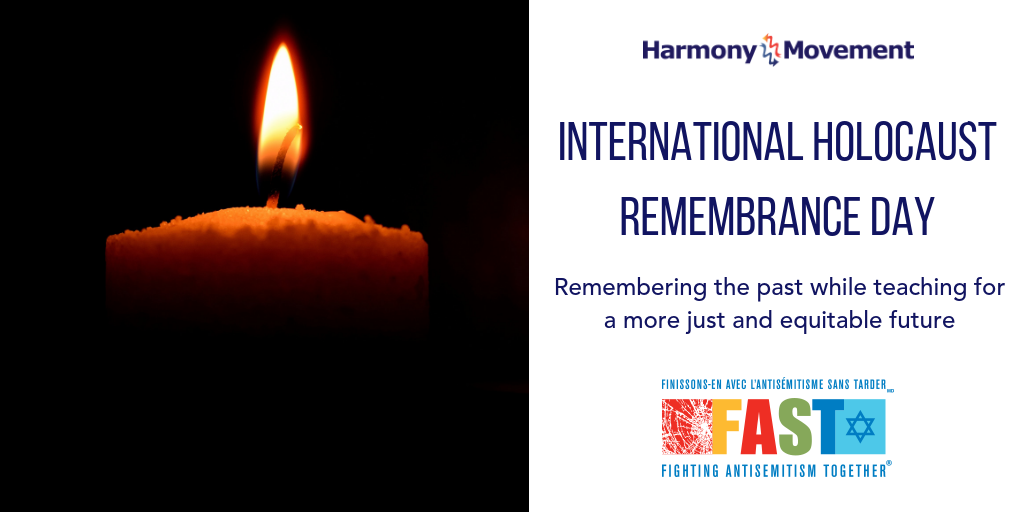 In a few short weeks, Jewish communities and allies across the world will recognize International Holocaust Remembrance Day. During a time of heightened political tribalism – you vs. me, them vs. us – taking time to reflect on the consequences of othering is of incredible importance. The date, January 27th, is not arbitrary – it is the anniversary of the 1945 liberation of Auschwitz-Birkenau. While gross human rights abuses are not to be considered on a single day and then forgotten, having a marked day intentionally rooted in history gives us a chance to honour Jewish victims of the Holocaust as a global community. It is imperative, however, that we honour the past while also recognizing the role it plays in our present.

For many Jewish Canadians, news that antisemitism is on the rise is hardly news at all. With reports of antisemitic graffiti in North York as well as the recent attack of four Jewish youth making headlines, growing hate in our communities simply cannot be ignored. The recent shooting at the Tree of Life Synagogue in Pittsburgh sent waves of grief across North America, making this January 27th a particularly difficult one. A government report on 2017 police-reported hate crime, released at the end of November 2018, reveals that the rise in hate crimes nationally is driven largely by incidents in Ontario and Quebec. Between 2016 and 2017, hate crimes against the Jewish population increased 41 per cent in Ontario alone. Nationally, they rose from 221 in 2016 to 360 in 2017 and accounted for 18 per cent of all hate crimes in Canada.

As educators, we have an immense responsibility to not only make sure our students are safe, but to teach our students how they can build safe communities for others. International Holocaust Remembrance Day provides us with an authentic segue into critical discussions on human rights and growing antisemitism. Here at Harmony, we’ve partnered with FAST (Fighting Antisemitism Together) to bring you detailed resources that you can use in your classroom.

Choose Your Voice (www.chooseyourvoice.ca) provides free online teaching tools for students in grades 6, 7, and 8. Unit 1, Bursting the Voices of Stereotypes, provides an age-appropriate overview of the impacts of stereotypes and bias. The site provides a detailed lesson plan, video, and guided discussion questions that help you bring meaningful content to your classroom. Moving through the site, teachers will find additional plans, program materials, and student resources across multiple units.

Voices into Action (www.voicesintoaction.ca) includes free curriculum-based teaching resources for teaching about prejudice, human rights, and social justice to high school students. Chapter 1 of Unit 2, for example, asks students to critically consider the rise of Nazism in Germany. What motivated people living during the reign of Hitler to conform or dissent against the acts of the Holocaust? Students are encouraged to consider the role of bystanders and are later given the opportunity to explore the power of Holocaust art (Unit 5).

Both sites are free to educators – now and always – and simply require registration with site administrators. As human rights educators, facilitators at Harmony Movement approve of and endorse the content developed by FAST; we are grateful to have partnered with them and to be able to share their incredible work.

With so many resources available, and with antisemitism become an increasingly dangerous threat to all of our communities, we have to recommit ourselves daily to recognizing and responding to all forms of oppression. The International Holocaust Remembrance Day is a chance for us to take meaningful first steps toward acknowledging the past while working toward a more just present and future.